Common mineral could be key to tackling climate change 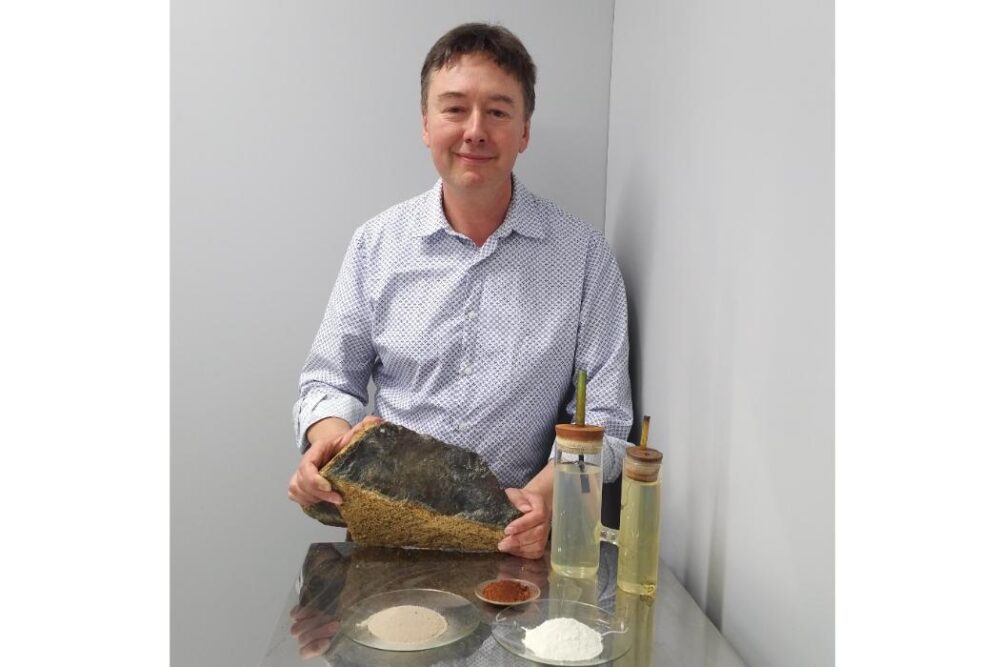 Associate Professor Allan Scott is leading a team of international researchers who have discovered a new method of producing magnesium hydroxide, which they believe is key to reducing greenhouse gas emissions. Image courtesy of the University of Canterbury.


A team of international researchers believe they have discovered a potentially revolutionary key to reducing climate change impacts, using a common mineral.

Associate Professor Allan Scott from the University of Canterbury (UC) Civil Engineering and his team in the United States, United Kingdom and New Zealand, have found a new low-carbon method to produce the common mineral, magnesium hydroxide or Mg(OH)2.

Associate Professor Scott explains that magnesium hydroxide has been widely recognised as one of the most promising materials for ‘carbon mineralisation’ (where carbon dioxide or CO2 is prevented from entering the atmosphere), but until now there hasn’t been an energy-efficient way of producing it.

“Most processes to get magnesium hydroxide typically involve CO2 emissions. We are proposing a new method to produce magnesium hydroxide from olivine; an abundant mineral here in New Zealand and around the world. Our method uses existing technology, produces useful by-products and most importantly there’s low to zero CO2 emitted during the process,” he shared.

In a paper published in Communications Earth & Environment in February, the researchers detail that olivine can be ground into powder, combined with hydrochloric acid and a process of electrolysis can be used to produce magnesium hydroxide.

Lab trials showed that 100 tonnes of olivine could potentially produce 35 tonnes of magnesium hydroxide, as well as 35 tonnes of amorphous silicate – a material used in products such as semiconductor circuits and cement.

“The discovery of this method has the potential to have a dramatic impact on our ability to reduce global CO2 emissions,” Associate Professor Scott said.

Around 40 billion tonnes of human-made CO2 is released into the atmosphere each year that contributes to global warming. Of that, ‘point source’ emissions such as power generation [coal plants, natural gas] and industrial production account for roughly 50 per cent of the total CO2.

“This new method makes it possible to produce magnesium hydroxide on a large scale, which can then be transported to industrial and manufacturing sites to mineralise the CO2 produced,” he said.

“In theory it’s possible to remove and sequester at least half of the 40 billion tonnes of CO2 and continue to do so for thousands of years. The challenge now is how we take this method from the lab to an industrial-scale process which can be widely distributed at a reasonable cost.”

Magnesium hydroxide Mg(OH)2 is a highly reactive material that when combined with carbon dioxide (CO2) – one of Earth’s most significant greenhouse gases – produces magnesium carbonates, an inorganic salt which is used in a variety of commercial products such as flooring, fireproofing and bricks.