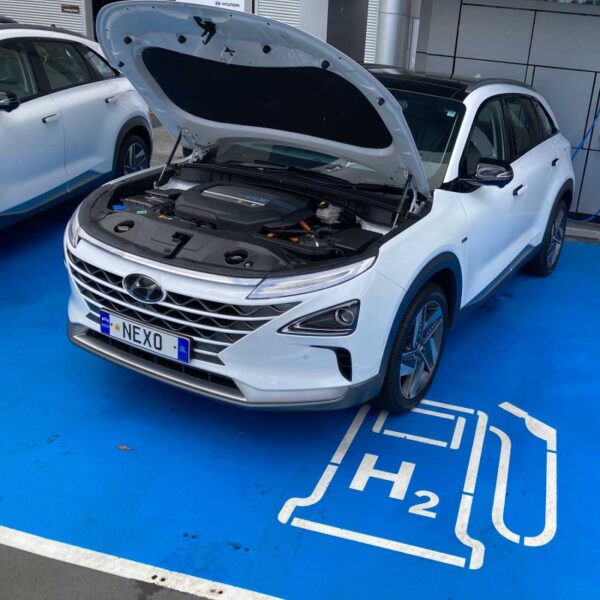 Hydrogen powered Hyundai NEXO with hood up, image courtesy of the University of Newcastle.

A state-of-the-art green hydrogen fuel, developed in partnership between the University of Newcastle and Southern Green Gas has today been unveiled, laying the path for renewable methane and other renewable fuels.

The partnership is aimed at creating carbon-neutral energy from Australian research and development, and renewable resources.

At the heart of the technology is the ability to extract pure water from air, then using electrolysis – an electrical current generated from solar panels, split the pure water into hydrogen and oxygen before storing hydrogen as a gas which can be used to power vehicles.

The partnership is developing manufacturing capability across other renewable fuels, including green methane which is made by combining hydrogen with carbon dioxide from the atmosphere.

Easily transported in existing gas pipeline infrastructure, green methane can be used as a renewable form of natural gas or converted back to hydrogen at the point of use.

“We believe this technology represents an important pathway in achieving zero-emissions driving worldwide and we are excited to work with our technology partners to make this vision a reality,” he said.

University of Newcastle Vice-Chancellor, Professor Alex Zelinsky, said that Australia is looking to the Hunter to help kickstart the nation’s Hydrogen economy.

“With a strong track record in future-focused energy innovation, the University of Newcastle is ideally placed to leverage regional cooperation across industry, infrastructure and government. This project, demonstrating green hydrogen on our roads for the first time, is a potent example of this region-wide approach translating into real-world outcomes.”

Professor Behdad Moghtaderi of the University of Newcastle added: “We’ve worked with Southern Green Gas to develop the ability to manufacture green hydrogen at a lab-scale, the results of which we’re seeing demonstrated here today in the Hyundai hydrogen vehicle.”

“Seeing this fuel hit the roads is a proud moment for my team, who have worked to perfect it over several years. We’re now looking forward to scaling this technology, working with Southern Green Gas toward commercial rollout and a wide range of possible applications.”

Executive General Manager of Coregas, Alan Watkins, said that the company is delighted to work with Southern Green Gas and University of Newcastle, including providing equipment and gas testing of hydrogen generated by the technology, which passed with flying colours.

“We see an important future for clean gases powering the world’s electric vehicles, be they battery or hydrogen fuel cell,” he said.

CEO of Enapter, Sebastian-Justus Schmidt, commented that Enapter is a pioneer of hydrogen generated from electrolysis producing the first scalable electrolyser that replaces fossil fuels with green hydrogen.

“By partnering with Southern Green Gas and University of Newcastle, our technology has formed a backbone of this industry first, providing a scalable pathway towards zero-emission fuels for mobility markets.”

Haskel’s Global General Manager – Hydrogen, Darran Heath, shared that their goal is to create a more sustainable world through the proliferation of clean gases across applications, including mobility.

“Hydrogen and renewable methane present real opportunities to transition the emissions-intensive transport sector faster with Southern Green Gas and University of Newcastle’s technology a pathway to get there,” Mr Heath said.

The project is supported by ARENA and the NSW Government.