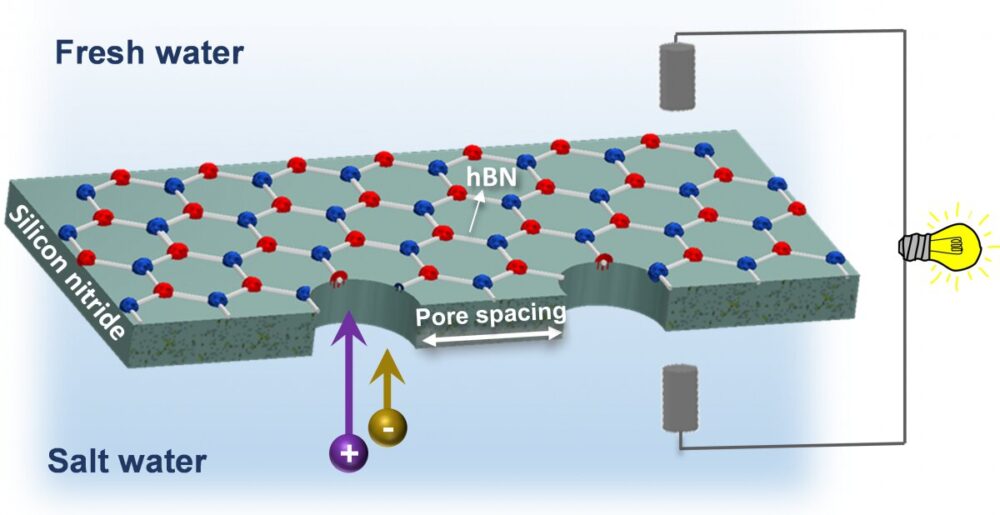 
Researchers at McGill University have demonstrated a technique that could enable the production of robust, high-performance membranes to harness an abundant source of renewable energy.

Blue energy, also known as osmotic energy, capitalises on the energy naturally released when two solutions of different salinities mix – conditions that occur in countless locations around the world where fresh and saltwater meet.

The key to capturing blue energy lies in selectively permeable membranes, which allow only one constituent of a saltwater solution to pass through – either the water molecules or the dissolved salt ions – but not the other.

A problem of scale

To date, large-scale blue energy projects such as Norway’s Statkraft power plant have been impeded by the poor efficiency of existing membrane technology.

In the laboratory, researchers have developed membranes from exotic nanomaterials that have shown great promise in terms of the amount of power they can generate relative to their size. But it remains a challenge to turn these vanishingly thin materials into components that are large enough and strong enough to meet the demands of real-world applications.

In results recently published in the journal Nano Letters, a team of McGill physicists demonstrated a technique that may open a way to overcome this challenge.

“In our project, we aimed to remedy the inherent mechanical fragility problem while exploiting the exceptional selectivity of thin 2D nanomaterials by fabricating a hybrid membrane made of hexagonal boron nitride (hBN) monolayers supported by silicon nitride membranes,” explained lead author Khadija Yazda, a postdoctoral researcher in the Department of Physics at McGill.

To achieve the desired characteristic of selective permeability, Yazda and her colleagues used a technique developed at McGill called tip-controlled local breakdown (TCLB) to ‘drill’ multiple microscopic holes, or nanopores, in their membrane.

In an advance on previous research that focused on experimental prototypes with a single nanopore, the McGill team was able to exploit the speed and precision of TCLB to prepare and investigate membranes with multiple nanopores in various configurations of pore size, number and spacing.

“Our experiments on pore-pore interaction in nanopore arrays shows that the optimum membrane selectivity and overall power density is obtained with a pore spacing that balances the need for high pore density while maintaining a large extent of charged surface (≥ 500nm) surrounding each pore,” Yazda explained.

Having successfully produced an array of 20 by 20 pores on a membrane surface 40µm² in size, the researchers say the TCLB technique could be used to produce much larger arrays.

“A natural next step for this research is to try scaling up this approach not only for large-scale powerplants but also in nano- or micro-power generators,” Yazda commented.