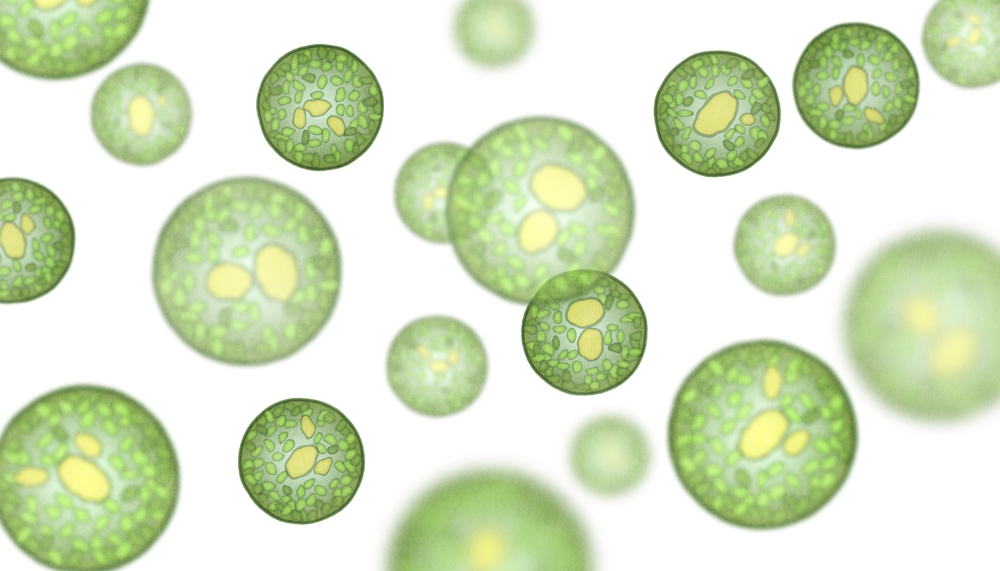 Illustration of microalgae under a microscope via. Shutterstock.

With additional renewable energy processes, such as hydro-electricity, integrated with the researchers’ hydrogen production process, carbon emissions could drop by as much as 87 per cent.

The research, published in the Journal of Cleaner Production, also highlights that with the prevailing cost of hydrogen at $10 per kilo, and using RFV to produce the gas, the payback period of initial investment is just 3.78 years with a 22 per cent internal rate of return.

The Monash-led team is the world leader in RFV gasification technology and analysis. RFV is a gasification process that uses oxygen and steam that converts biomass or fossil fuel-based carbon materials into gases.

Currently, the production of microalgae does not meet commercial demand. However, microalgae cultivation for energy applications could provide additional revenue streams for rural communities, potentially making them self-sufficient, researchers say.

“Microalgae as a feedstock is attractive due to its high carbon dioxide fixation efficiency, growth rate, photosynthetic efficiency, ability to grow in brackish water – like rivers and lakes – and the ability to cultivate it on land not suitable for agriculture,” Associate Professor Tanksale said.

“Water and renewable electricity integration with microalgae harvesting can bring down the costs and increase the sustainability of hydrogen production from this process.”

Dr Yogendra Shastri from the Department of Chemical Engineering at IITB-Monash Research Academy Mumbai said climate change concerns have led to an increasing push for cleaner energy options, and microalgae could be a potential candidate to produce renewable fuel.

“Hydrogen is acknowledged as clean fuel since it doesn’t lead to the emission of greenhouse gases when used. However, the production of hydrogen also needs to be sustainable,” Dr Shastri said.

“Biodiesel production from microalgae is limited due to low lipid extraction efficiency, less than 20 per cent, and the high cost of microalgae harvesting and drying.”

“Furthermore, microalgae-based hydrogen and methane production haven’t yet been commercialised due to expensive pre-treatment, such as harvesting, drying and lipid extraction; low carbon conversion efficiency; and tar accumulation,” he shared.

Researchers performed the RFV of microalgae using temperatures ranging from 550-650°C using steam as the gasifying agent. This meant the dewatering or drying of microalgae wasn’t required and significantly reduced energy consumption.

Using India-based JSW Steel (the funding agency for this research) as a case study for their source of CO2 for microalgae cultivation, the research team estimated just under 12,800 kg an hour of microalgae would be available for hydrogen production at a rate of 1240 kg/h.

“This is an exciting look into the resources and technology available to the world in our quest to reduce the use of fossil fuels and drastically cut the amount of carbon emissions.”

The study titled: ‘Renewable hydrogen and methane production from microalgae: A techno-economic and life cycle assessment study’ can be downloaded here.