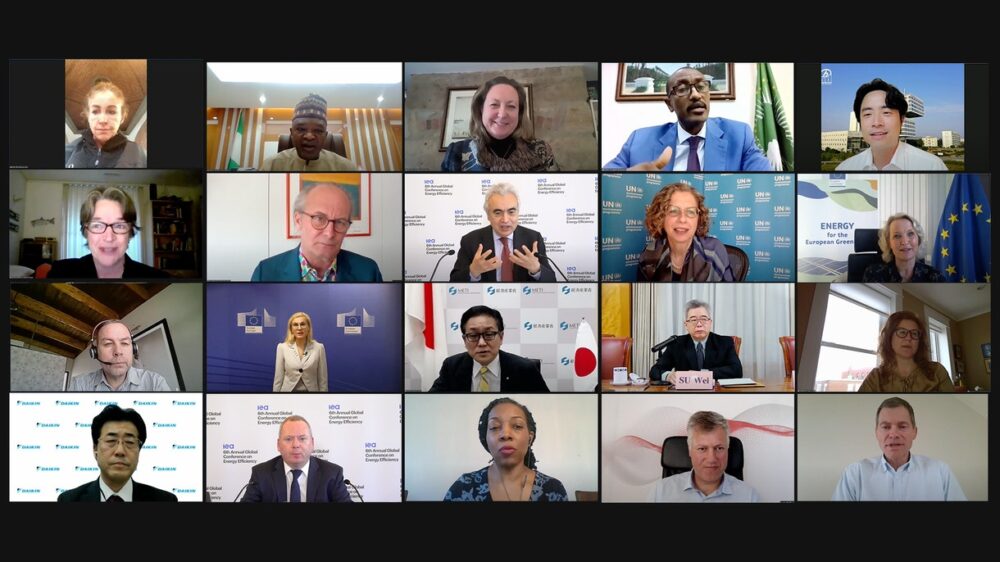 Image courtesy of the IEA.

Participants included ministers and other senior government figures from countries and institutions including Canada, China, the European Union, Japan, Nigeria, the United Kingdom, the United States and the United Nations Environment Programme.

In addition to energy efficiency’s essential role in reaching climate goals, speakers at the conference emphasised its many benefits in relation to job creation, economic growth, alleviation of fuel poverty, promotion of access to energy and other important areas.

A major theme echoed by leaders from business, civil society and government was the need to work together, not just across sectors, but also internationally to accelerate action together.

In his opening remarks at the conference, Executive Director of the IEA, Fatih Birol, highlighted that global energy-related carbon dioxide (CO2) emissions had risen above pre-COVID-19 pandemic levels by the end of 2020 – and that last year’s gains in energy efficiency were the slowest in a decade.

“Our analysis is very clear: In the absence of strengthening energy efficiency initiatives around the world, we have no chance whatsoever of meeting our energy and climate goals,” Dr Birol said.

“We call on the governments with us today to make use of their existing efficiency policies but also to push the next generation of policies – making use of digital technologies, smart grids and other key solutions.”

During the discussions, speakers underscored the important role that super-efficient equipment – like air conditioning, lighting and industrial motors – will play in the journey to net-zero emissions.

They highlighted the Super-Efficient Equipment and Appliance Deployment Initiative and its role in raising ambition for energy efficiency progress worldwide.

The full agenda of high-level speakers is below, as well as the video of the entire conference for replay.

Watch it back here: