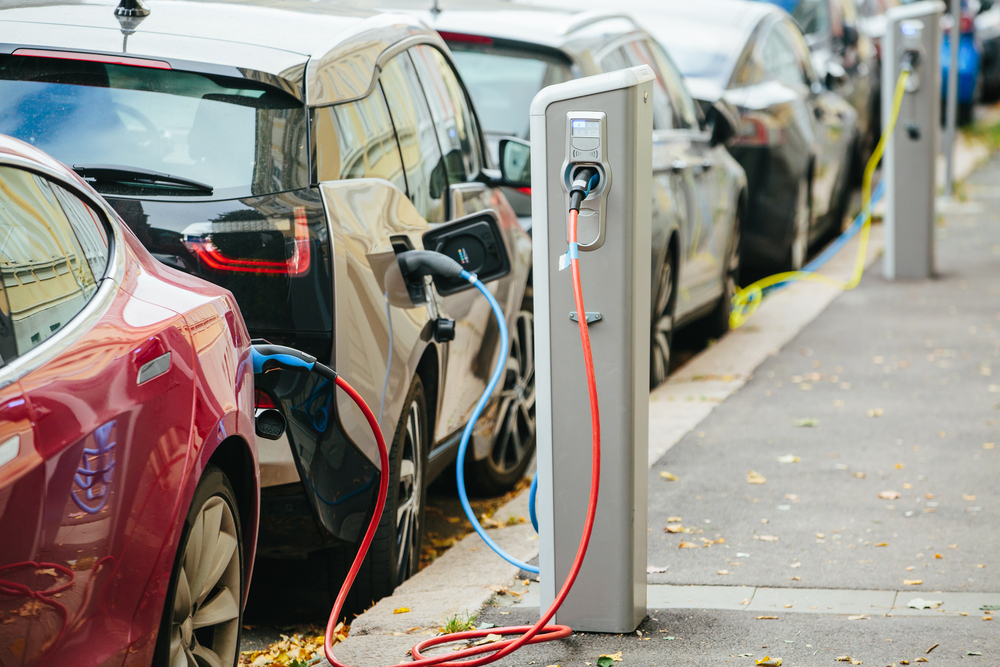 The market penetration of electric vehicles (EV) is increasing rapidly as a result of the accelerating energy transition, and demand for batteries is expected to skyrocket going forward for both transportation and grid storage. Rystad Energy’s latest Energy Transition Report reveals that the share of EVs in global new passenger car sales is set to quadruple in 2026 from 4.6 per cent last year and exceed 50 per cent from 2033 onwards.

In 2021, Rystad Energy expects EVs will take up around 6.2 per cent of global passenger car sales, with the share climbing to 7.7 per cent the following year. It forecasts that Europe will continue to lead EV adoption by a wide margin in years to come. Its share of EV sales is expected to top 10 per cent already in 2021 and 20 per cent in 2025.

North America and Asia are anticipated to follow suit, albeit at a slower pace. The Middle East and South America are also projected to see increases further in the future, but the adoption rate of EVs will remain lower than rival continents for some time.

Looking at the long term, EV adoption rises steeply towards 2040 and clusters just short of 100 per cent by 2050 in nearly all regions except Africa.

The rise of battery electric passenger cars will also be the prime driver for battery demand in transportation. The combined new battery demand across all transportation segments is expected to grow 15 per cent annually on average between 2020 and 2050, gradually rising from 0.23 terawatt-hours (TWh) in 2020 to over 1 TWh already in 2024.

Passenger cars will be, by far, the best market for new batteries, accounting for about 70 per cent of total demand in the long term and for almost all demand till 2025.

From that point of time, Rystad Energy expects battery adoption will start increasing in the heavy transport segment, with shipping and aviation only starting a low-level adoption from around 2030 onwards.

Marius Foss, senior vice president and head of global energy systems at Rystad Energy, said in the shipping sector, the main applications for batteries will be for smaller vessels and auxiliary systems for larger vessels.

“This could change with major technological breakthroughs, for example within lithium-air batteries. However, this type of breakthrough does not appear to be imminent. Aviation is still at least 10-15 years away from a significant uptick in commercial electric flights,” Foss explained.

Although the impact of electric aviation could be very positive from a climate perspective, it would still be small in terms of gigawatt-hours (GWh) of battery demand compared to the other segments, due to the relatively limited number of aircrafts (as compared to, for example, global passenger vehicles).

This could obviously also change if electric aviation drives a change towards smaller but more numerous aircrafts.

With each incremental drop in cost comes an incremental increase in batteries’ total addressable market. Batteries originally entered the power sector as an ancillary service, stabilising the grid by providing a short burst of electricity, but they have proven to be more than just a backup.

In recent years, grid batteries have started to disrupt the frequency control markets, eating into the market for peaker plants, and most recently, baseload capacity in combination with solar and wind.

If battery costs continue to decline at current rates, they will comprise an increasing share of the power market and can, together with cheap renewables, potentially displace a significant portion of the current fossil fuel baseload generation.

This development will also provide cheap batteries for other parts of the energy system, including distributed and behind-the-meter batteries in buildings, as well as support the rapid electrification of the transportation sector.

Rystad Energy highlights that currently the demand for batteries for grid storage is negligible but is expected to rise in the future.

Battery cycle life is also important to consider, as a battery will eventually degrade to 80 per cent of its original capacity, which means that range will also decline to 80 per cent. EV batteries are typically designed to have a cycle life equal to the overall life expectancy of the vehicle (around 15 years), at which point they can be repurposed as grid storage.

There will therefore be a 15-year lag before these EV batteries end up in storage, but it is natural to assume that a large share of the future grid storage demand can be met with repurposed EV batteries. Combining the two takes us to a future plateau of 20 TWh of new batteries needed across both sectors. 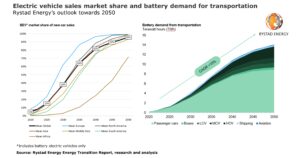 Based on 2020 data, Rystad Energy calculates the average EV battery costs at $146 per kilowatt hour (kWh), a costly price tag that shows there is still room for improvement. In fact, of the various stages of manufacturing, just the special battery pack manufacturing process required of EV batteries is making up $37 of the total cost.

Across all stages, energy costs are the largest cost element, making up about 34 per cent of total costs across the entire value chain, while only 9 per cent is labour. Plant and machinery investments comprise 24 per cent. Materials and other costs complete the remaining 33 per cent.

Given the trajectory of battery prices over the past decade, one might think this leaves limited room to further improve economics. This is further substantiated by the fact that the cost of raw materials represents an increasing share of the total cost for battery cell manufacturers, and currently stands at 50 to 60 per cent of the cost of goods sold (depending on chemistry and form factor).

But if one was to expand the analysis to look at the various cost components of the entire value chain for batteries, they might arrive at a different conclusion. For example, 34 per cent of the cost of battery production is tied to energy consumption, most of this involves electricity used for drying operations in the chemical processing and cell production phases.

“With new, improved techniques and cheaper electricity, this could be reduced – a potential that will likely soon be realised in cell manufacturing,” outlines Rystad Energy.

The company also sees a shift towards more vertical integration in the battery industry, with battery producers moving upstream in order to better optimise the mining and processing part of the value chain.

As both battery cell and battery pack designs become more specialised and optimised for their intended applications, there is also the potential to reduce expenses related to non-active materials, to cut labour costs through automated manufacturing processes, and to reduce up-front investments through enhanced production facility design.

A major concern often raised around lithium-ion batteries is the lack of recycling. Although this is true today, it is important to put this into perspective.

Current consumption of batteries by the transportation and energy storage segments is only at around 2 per cent of expected future demand. This 2 per cent is being installed into vehicles and storage products today. This means that these batteries won’t be available for recycling for another 10 to 20 years, depending on chemistry and use case.

The industry thus still has several years to find a solution. Many companies see this as a major opportunity given the huge value of the raw materials in fatigued batteries. This list of companies is long and includes everything from major industrial players and big auto, to start-ups led by former EV executives.

Rystad Energy highlights that the most promising technology is hydro-metallurgical recycling, which can recycle around 90 per cent of the material. In the company’s overall demand forecast, they assume that 75 per cent of batteries from transportation will end up in storage, where they will be used for an additional 10-15 years before being ready for recycling.

Assuming the remaining 25 per cent of used batteries will be recycled directly at the end of the vehicles’ service life, then the development in raw material demand will not add any real volume before well into the 2040s. By then we should have plenty of decent technologies to recycle these spent batteries.

To address the energy transition and identify the latest trends, Rystad Energy has initiated a monthly Energy Transition Report, which showcases and analyses the latest developments across key transition variables, societies and technologies.