China cracks down on bitcoin mining to reduce its emissions 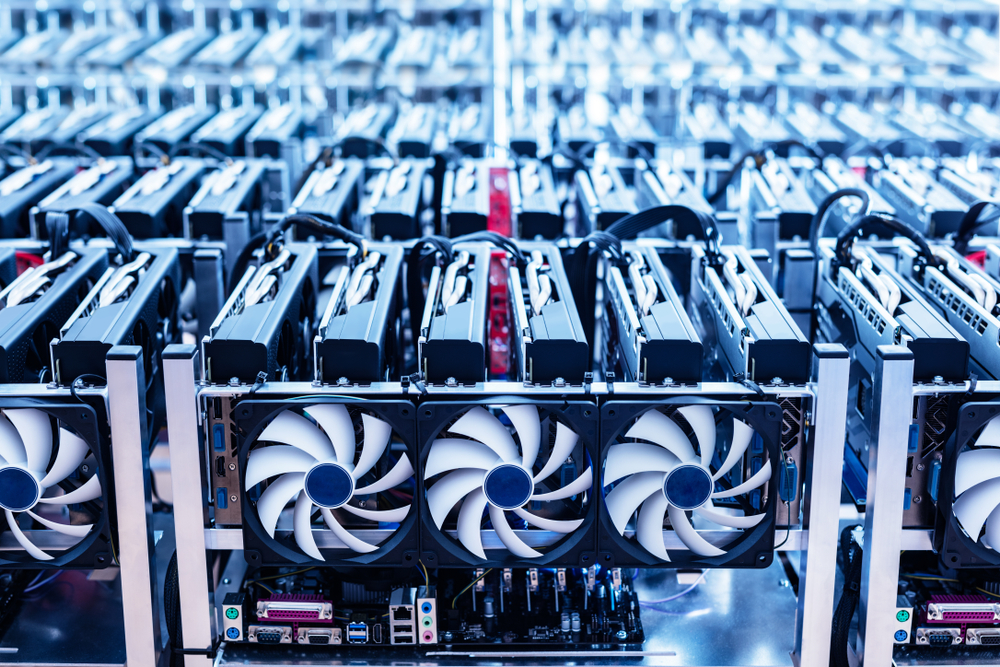 
Mining bitcoin and other cryptocurrencies consumes vast amounts of energy. Increasing scrutiny over the environmental impact of this activity recently led the Chinese government to order a crackdown on projects around the country, and now most of them are reportedly already halted.

Recent Rystad Energy analysis shows that until recently, China’s bitcoin production used to emit as much carbon dioxide (CO2) as the whole country of Portugal, a whopping 57 million tonnes (Mt) annually. China mined about 65 per cent of the world’s total bitcoin using electricity that was 63 per cent coal-fired in 2020. This means that at least 40 per cent of the bitcoin mined globally was powered solely by burning coal in China.

Around 7,815 terawatt-hours (TWh) of electricity was produced in China last year. In addition to coal, hydropower plants supply about 17 per cent and the remaining 20 per cent comes from a mix of other sources including wind, nuclear, gas and solar. Bitcoin mining in China is estimated to require 86 TWh of electricity per year, or 1.1 per cent of China’s total electricity demand.

“Even though the share of emissions from bitcoin mining in China remains small compared to other economic activities, it still makes sense for the Chinese government to curb production of cryptocurrency as the energy intensity of this activity is very high. This is one of the many sectors that China needs to target to meet its pledge of becoming carbon neutral by 2060 and reach peak emissions by 2030,” said Carlos Torres Diaz, Head of Rystad Energy’s power and gas research. 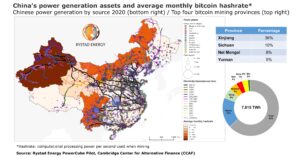 Some supporters of the cryptocurrency argue that Chinese mining takes place mostly in provinces with a high share of renewable energy. Rystad Energy therefore studied the sources of electricity supply in the regions where bitcoin mining takes place to estimate the bitcoin-related carbon emissions.

Bitcoin mining takes place across the country, but 59 per cent of the activity occurs in four provinces: Xinjiang in the northwest part of the country, Sichuan in central China, Nei Mongol in the north and Yunnan in the south, according to data from the Cambridge Center for Alternative Finance.

Xinjiang is one of the largest provinces in China and most of the power generated there comes from coal power plants. There are more than 200 coal-power generation units with an estimated aggregated capacity of close to 74 gigawatts (GW).

Hydropower was until recently the second-largest source of electricity with around 2.2 GW of operational capacity but has been overtaken by solar PV with a total installed capacity of 3 GW.

Rystad Energy states that the existing installed capacity suggests that around 96 per cent of the province’s electricity is generated by coal and 4 per cent by renewable energy, which would indicate a large carbon footprint for the province’s bitcoin mining. However, the company notes that a broader analysis of the Chinese generation system is needed to understand the real impact.

In contrast to Xinjiang, the installed power generation capacity in Sichuan is mostly hydropower. The province has more than 100 gigawatts (GW) of hydroelectric capacity, while coal is the second-largest source with less than 20 GW of installed capacity.

However, to say that bitcoin mining in Xinjiang is dirty while in Sichuan it is clean would be to oversimplify things. The Chinese power generation system is very well integrated, with high-voltage transmission lines branching out from the high demand centres on the southeastern coast and all the way into the far west and northeast.

The high degree of interconnection between provinces suggests that electrons can flow in any direction depending on where the demand is and which plants have priority in the merit order. This means that bitcoin mining centres across China are most likely supplied by several power sources and not necessarily by the closest plants.

To estimate the carbon footprint of bitcoin Rystad Energy therefore needed to look at the nationwide power mix rather than the mix in the individual provinces where the mining takes place.

The distribution of the different sources of electricity generation and transmission lines across China suggest that the power consumption from mining could be proportional to the country’s total electricity consumption with around 67 per cent being supplied from fossil fuels and the rest from non-carbon emitting sources.

This led the company to the conclusion above – that Chinese bitcoin mining used to contribute to a substantial amount to global emissions every year.

Why bitcoin mining needs that much power

Cryptocurrencies are based on ‘blockchain’, a record-keeping technology serving as a digital ledger for transactions. In bitcoin’s case, blockchain is used in a decentralised way so that no single authority has control – instead, numerous processing units of the network collectively retain control.

New cryptocurrency units are ‘mined’ into existence as ‘rewards’ when a computing unit solves a complex mathematical problem to validate an existing cryptocurrency transaction.

The energy consumption problem arises from two factors: First, numerous specialised processing units are competing for the same reward and are doing the very same computing in parallel. Second, and more important, bitcoin uses a ‘proof-of-work’ (PoW) mathematical system with a complex mathematical problem to mine new bitcoins and verify transactions.

This mathematical problem can only be solved by trial and error, and the odds of solving the problem are about 1 in 6 trillion. This requires substantial computing power, which uses considerable amounts of energy.