Technology enables the safe use of hydrogen in aviation sector 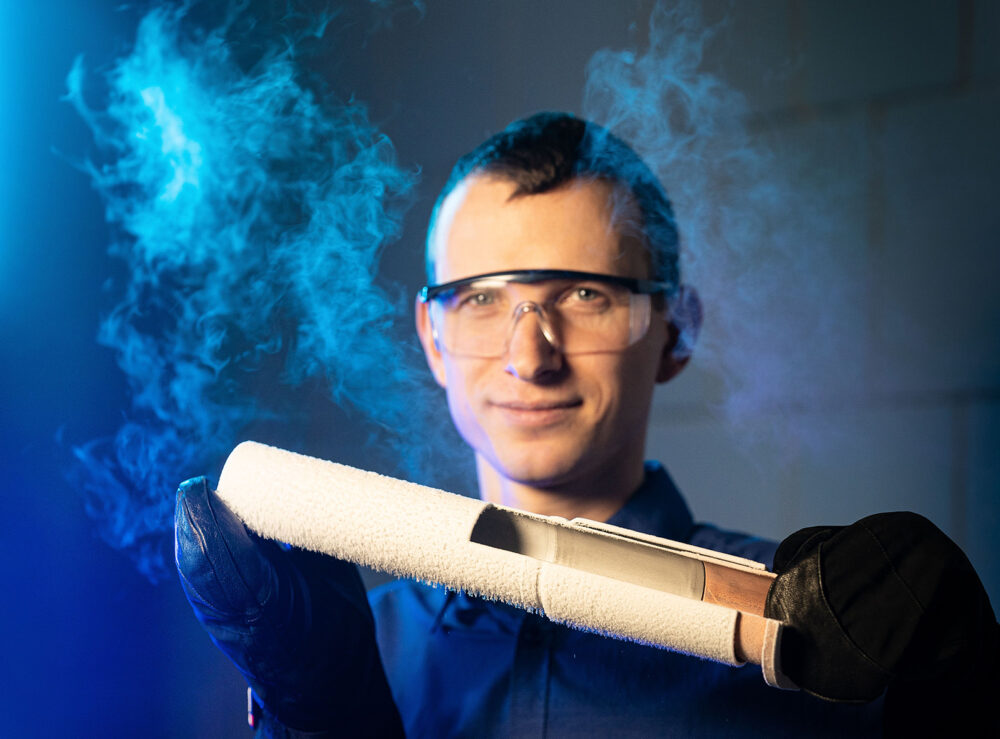 Magnetic pulse welding is able to create solid state joints between dissimilar materials like copper, aluminium and steel. The method fulfills the tightness requirements even at very low temperatures, in systems for storing and distributing liquid hydro-gen for example. Credit: ronaldbonss.com


Eco-friendly flying is on the horizon. All over the world, researchers are developing new technologies to achieve this goal. One focus of developments is the idea of using hydrogen-powered engines for aircraft in the future. Aviation companies, though, face the challenge of storing this energy source.

Hydrogen turns to liquid when cooled to minus 253 degrees Celsius, and only then can it be used as a so-called cryogenic fuel. Both tanks and pipe systems in the aircraft have to be absolutely tight at such low temperatures.

An innovative new welding process has been developed to help: magnetic pulse welding.

Researchers at the Fraunhofer Institute for Material and Beam Technology IWS in Dresden have now demonstrated that this joining technology can produce extremely resilient, metallic mixed joints for cryogenic applications. They achieved these outstanding joint properties in cooperation with the Technical University of Munich.

Scientists at Fraunhofer IWS provided the research neutron source Heinz Maier-Leibnitz (FRM II) at the Technical University of Munich with a special component made of copper, high-grade steel and aluminium for its cryostats – cooling systems that are able to maintain extremely low temperatures.

Until now, this assembly had to be produced by a complex process involving multiple laser beam welded seams, additional joining elements and a brazed or electron beam welded seam.

“But then there were problems with stability and tightness,” shared Dr Markus Wagner, Group Manager Design and Special Processes at the Fraunhofer Fraunhofer Institute for Material and Beam Technology IWS.

The magnetic pulse method creates tighter joints within just a few microseconds. These joints function reliably both at very low temperatures of down to minus 270 degrees Celsius and also wherever extreme temperature differences prevail. Overlaps, which provide even more stability, are also created at the joints.

The technologies previously applied by the researchers at the Technical University of Munich are among the group of fusion welding processes. Metals are fused to create a joint between them. However, these methods rely on the metals having similar fusion points. This is the temperature at which a substance begins to fuse.

As Dr Jürgen Peters, Head of Sample Environment at the research neutron source Heinz Maier-Leibnitz (FRM II) of the Technical University of Munich explains: “The problem comes when we try to create joints between metals that have highly dissimilar fusion temperatures or become extremely brittle when mixed together – aluminium with copper or high-grade steel, for example. The samples welded by the magnetic pulse method provided by our partners at Fraunhofer IWS passed the tightness tests.”

Scientists in Dresden have been researching a new process for several years now. The materials do not need to be fused.

When the process starts, there is a distance of one to one-and-a-half millimetres between the joining partners. A magnetic field causes one of the two partners to accelerate.

In the rest of the process, the metals collide with a bright flash at high speeds – 200 to 300 metres per second. A high pressure is then generated on the joining surface and this ultimately welds the two metals together.

A measuring system, likewise developed at Fraunhofer IWS, guarantees throughout all this that the components are correctly positioned, collide at the right angle and that the entire process consumes the smallest possible amount of energy.

The great advantage of magnetic pulse welding is that it can join combinations of metals which, until now have been impossible or difficult to weld together – especially important when it comes to liquid hydrogen applications. 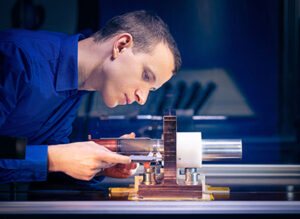 With magnetic pulse welding, the magnetic pressure of a tool coil ensures a high-speed collision and the formation of a solid-state joint of several millimetres in width, as well as high stability and leak tightness, even under extreme application conditions. Credit: ronaldbonss.com

Materials with poor thermal conductivity, high-grade steel for example, have to be joined to lightweight construction materials such as aluminium. The new process now makes this possible.

“The temperature only really gets hot at the boundary surface itself,” reports Wagner.

The process is said to be fast and cost-efficient and is able to produce joints of a consistently high quality.

“We can also employ this method to combine extremely thin-walled components,” adds Bellmann.

This is made possible by introducing special supporting elements that can be removed again when the process is complete.

And the new process holds potential for more than just aviation and aircraft construction. Its good electrical conductivity in the joining zones also makes it an attractive proposition for the electromobility sector and for processes in the electronics manufacturing industry.