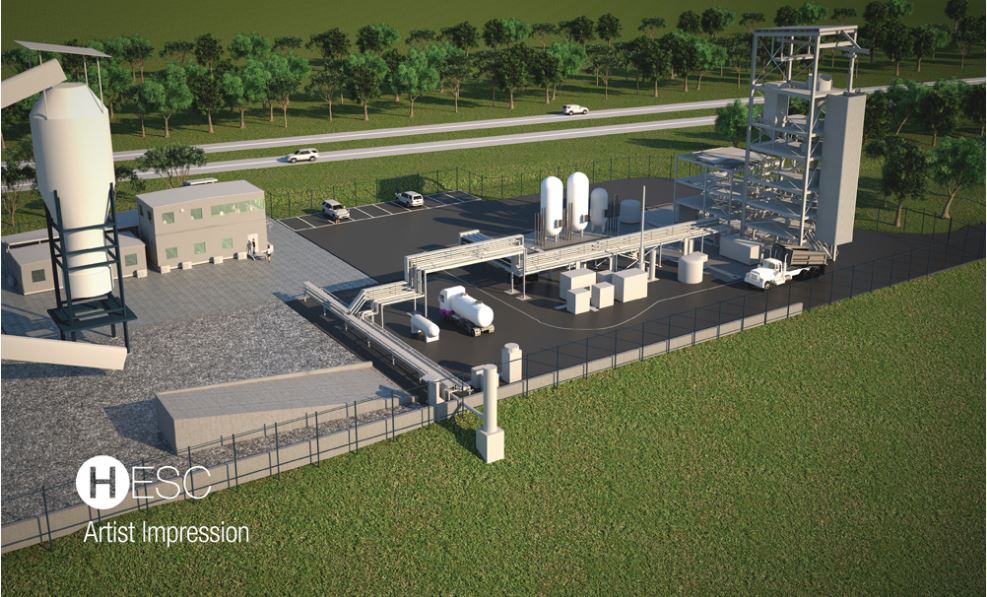 On Thursday 11 March 2021, the Hydrogen Energy Supply Chain (HESC) Pilot Project announced the commencement of operations at both Victorian sites of its world-first integrated supply chain.

HESC Project Partners, together with the Australian, Victorian, and Japanese Governments and distinguished guests marked both milestones at the gasification and gas refining facility in the Latrobe Valley.

The HESC Pilot is developing a complete hydrogen supply chain, creating hydrogen gas via the gasification of Latrobe Valley coal, transport to the Port of Hastings for liquefaction, and shipment to Kobe in Japan.

The commencement of the Australian arm of operations, using Latrobe Valley coal to produce hydrogen, is a world first.

The HESC Pilot is being delivered by a consortium of experienced industry partners from Japan and Australia including Kawasaki Heavy Industries, J-POWER, Iwatani Corporation, Marubeni Corporation, AGL and Sumitomo Corporation, supported by the Victorian, Australian and Japanese Governments*.

Hirofumi Kawazoe, from Hydrogen Engineering Australia (Kawasaki’s subsidiary company based in Melbourne), said the progress of the HESC Pilot places Victoria and Australia at the forefront of the global energy transition to lower emissions via the fuel of the future, clean hydrogen.

“The next major HESC Pilot development will be the first shipment of hydrogen between Australia and Japan, aboard the world’s first purpose-built liquefied hydrogen carrier, the Suiso Frontier. The eyes of the world will be on Victoria, when shipments of liquefied hydrogen commence in mid-2021,” Mr Kawazoe commented.

“A commercial-scale HESC can leverage and build local skills, potentially creating thousands of jobs. This will include long-term employment in a new clean energy industry for the people of Gippsland,” Mr Stone said.

“Latrobe Valley has a proud history powering Australia and today we celebrate the next generation of energy technology in the region.”

The Victorian and Commonwealth Governments’ CarbonNet Project is developing in parallel with HESC and is essential for the hydrogen pilot’s commercialisation.

If both projects are commercialised, carbon dioxide (CO2) captured during hydrogen production would be transported and stored by CarbonNet using carbon capture and storage (CCS) technology.

Rather than entering the atmosphere, CO2 emissions will be stored in rocks 1.5 kilometres beneath Bass Strait.

The pilot phase of the HESC Project will need to be completed and the results reviewed before detailed planning for the commercial phase can take place.

If the pilot phase is successful, the HESC project is currently planned to enter its commercial phase in the 2030s.

The HESC project participants outline that a commercial-scale HESC project could produce 225,000 tonnes of clean hydrogen annually with carbon capture and storage.

“We estimate our project could reduce CO2 emissions by 1.8 million tonnes per year, equivalent to the emissions of some 350,000 petrol cars,” Mr Stone said.

Yet the proposal to generate liquid hydrogen from brown coal fields by gasification has come under question from globally recognised catalysis scientist and entrepreneur, Professor Thomas Maschmeyer.

Professor Maschmeyer, who is the recipient of the 2020 Prime Minister’s Prize for Innovation, said: “At this stage I cannot believe that the economics or environmental aspects for this proposal stack-up and cannot see the case for support with public money.”

Professor Maschmeyer, who is the co-founder of two multimillion-dollar technology companies, said: “There does not exist any commercial-scale capture of carbon dioxide of the type required for such a venture and the overall capital and operational expenditure for the process as a whole will be very high.”

“Gasification is very energy-intensive at the best of times. Gasifying brown coal is unheard of. All the water, which makes up 50 per cent of brown coal, has to be evaporated first for no gain. The inorganic sandy part then forms slag in the reactor, leaving not much organic matter to gasify per tonne of as-mined coal.”

“The extracted gas then has to be cleaned and pass another reactor to generate a pure hydrogen stream, which needs to be separated from the CO2.”

“Following this, the costs of capturing, compressing and transporting the CO2 generated for reinjection into a well will be very significant in terms of capital expenditure, operating costs, energy used and associated CO2 emissions.”

Professor Maschmeyer, from the School of Chemistry and University of Sydney Nano Institute, said: “All of this means this project is a very early idea and should be scrutinised in terms of simple energy and mass balances (i.e. efficiency and waste generated) as well as economics to enable an appraisal for its feasibility.”

*The Federal and Victorian Governments have both made $50 million commitments to the $500 million HESC project.