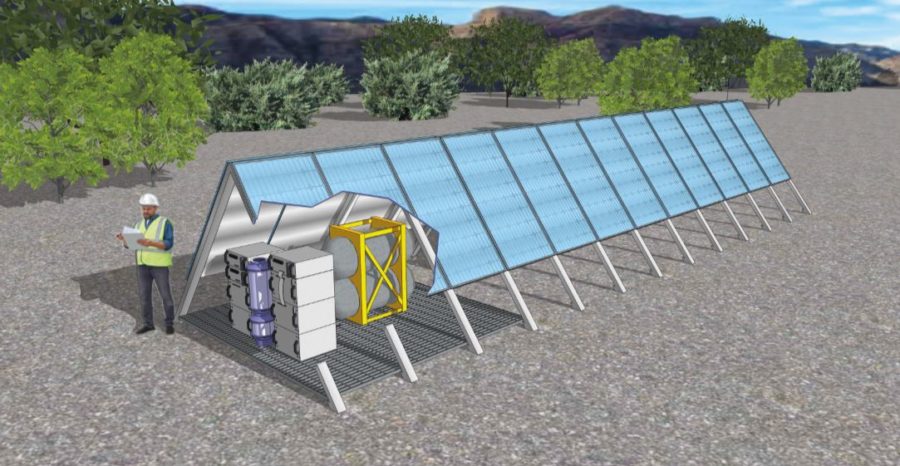 Artist’s impression of a renewable methane production module that would be found at the plant, courtesy of Southern Green Gas Limited.

APA Group (APA) has received $1.1 million in funding from the Australian Renewable Energy Agency (ARENA), which means a state-of-the-art renewable methane production demonstration plant can be built at the Wallumbilla Gas hub near Roma in Queensland.

The demonstration plant will produce approximately 620kg of hydrogen per year, which will be converted into 74 gigajoules of renewable methane. The methane will be able to be injected into APA’s natural gas pipelines across the East Coast Gas Grid.

APA has partnered with Southern Green Gas to develop the $2.2 million project to demonstrate the renewable methane process.

According to ARENA, the renewable methane process involves the production of renewable hydrogen from an Anion Exchange Membrane (AEM) electrolyser which uses water extracted from the atmosphere and is powered by solar PV. The hydrogen produced is converted to methane by reaction with carbon dioxide, which is also extracted directly from the atmosphere.

The demonstration plant will generate cost and technical data to be used to assess the feasibility of a larger, commercial-scale, renewable methane plant.

Minister for Energy and Emissions Reduction, Angus Taylor, said this type of innovative work is exactly what is needed for Australia to grow its domestic hydrogen industry.

“The gas network is expected to play a key role in supporting the decarbonisation of Australia’s energy system,” Mr Miller said.

“At scale, renewable methane has the potential to be a significant source of Australia’s future natural gas requirements all through the deployment of solar energy and capturing the water from the atmosphere,” Mr Miller said.

“Renewable methane is compatible with Australia’s developing hydrogen sector in that known technologies can convert methane to hydrogen and vice versa.”

APA Group’s CEO and Managing Director, Rob Wheals, said the science of producing methane is already well known, however this project is the first step in testing whether it is possible on an industrial scale to create methane, using solar-generated electricity, water and CO2 from the atmosphere.

“With this project we’re aiming to determine whether this carbon-neutral process might be part of the green energy solution of the future, and if our pipelines can be used to transport pure renewable energy domestically or to be exported,” Mr Wheals shared.